The Path of Descent is the Path of Transformation

At the end of August 2018, the Center for Action and Contemplation broadcast a conference that was part of the CONSPIRE 2018 series, based on Richard Rohr’s Seven Themes of an Alternative Orthodoxy.

The pattern of down and up, loss and renewal, enslavement and liberation, exile and return is quite clear in the Hebrew Scriptures. Through his own journey, Jesus modeled this counter-intuitive wisdom: “Unless the grain of wheat dies, it remains just a grain of wheat. But if it dies, it bears much fruit.” To avoid the death of our small, separate self is to avoid transformation into God, into union with one another, into something more. We must lose our life to find our life.
— from the CAC website

Registration required for lunch planning.
NO FEE. Free will offering will be accepted.

To RSVP for this event, please contact Josefina Fernandez no later than October 3 at email fucsina@mac.com or phone (440) 590-2473.

Contemplative Outreach Northeast Ohio (CONEO) and Holy Martyrs Church in Medina, Ohio, will host a Silent Saturday Day of Prayer on October 27, 2018. Join us for a morning of centering prayer and reflection as we seek to deepen our relationship with God through our relationship with all of creation. Our readings will present the concept of voluntary simplicity and our place in the environment as it relates to social justice and scripture.

To help us keep the event on schedule, we recommend arriving early to allow time for socializing, coffee and refreshments.

To help us plan, please RSVP using the contact information below.

To RSVP or for more information about this event, please contact Kate Valentine at email valentinekate@yahoo.com or by phone at (330) 472-0072.

Help us spread the word about the Silent Saturday Day of Prayer by printing the flyer at the attached link and sharing it with your church, office, school, friends and family. Or share it on Facebook!

Retreat Presenter, Martin Laird, O.S.A.
Father Martin Laird is Professor of Early Christian Studies at Villanova University. Fr. Laird’s published works include Into the Silent Land and A Sunlit Absence. This retreat offers time and space away from the busyness of daily life and allows the body, mind, and spirit to surrender to God’s presence and action within each one of us.

Click here for more information about United in Prayer Day.

Webinar Trinity: the Soul of Creation

A live broadcast of the conference Trinity: the Soul of Creation, being presented by Richard Rohr, Cynthia Bourgeault and William Paul Young in Albuquerque, New Mexico. Click here for more information about the topic of the conference.

Retreat/Conference
St. Theresa of Avila and the Interior Castle

A special Retreat / Conference weekend presented by Susan Komis, allowing sacred space and time to explore the Seven Mansions of Teresa of Avila’s Interior Castle. Together we reflected on the light of Teresa’s timeless insights into the human soul, its journey towards God, and how Teresa’s teaching is relevant to our personal contemporary spiritual journey. This retreat/conference included presentations, small group discussion with periods of Centering Prayer, reflection and silence. Suggested reading for this special event was “The Interior Castle,” from the Collected Works of Teresa, Vol. II, translation by Kavanaugh & Rodriguez.

To RSVP or for more information, contact Kate Valentine at email valentinekate@yahoo.com or by phone at (330) 659-6356.

To RSVP or for more information, contact the parish office at St. Dominic via email parishoffice@stdominicchurch.net or by phone at (216) 991-1444.

Participant feedback was very positive. The team consensus was that it was one of the best retreat days that has occurred.

Jackie stated that Josefina Fernandez had reported to her that St. Basil in Brecksville would be interested in doing the next Silent Saturday in January.

Chris Grostic believed that it was time to release again the Theological Principles of CONEO. It lists  the limitations set by the International Contemplative Outreach on our ministry We must also be aware of our own limitations: the number of team members available to do any expansion. We are already limited by the shortage of volunteers available to do retreats, etc.

Every CONEO group has its own personality based on their leadership and they are at liberty to include in their meetings anything that will enrich the group to fill the goals of contemplative prayer.

The Appreciation Luncheon on November 6th was very successful due to the careful planning of Josefina Fernandez and the support of Chris and Steve Gotch. Thank you notes will be sent to Chris and Steve for the use of their facilities and the fine food selection.

Mike Devault will be going on vacation until February. Before he leaves he will send out one more e-mail communication to the prayer groups. Suzanne Sweeney volunteered to take over his library duties until he returns, including keeping track of the sales. He has developed a list of 10 books to be recommended to new prayer group members.

Mike intends to visit the Epiphany Episcopal Church, Euclid before he leaves. They have a large ecumenical gathering each year. Mike has already visited the prayer groups at: St. Rita, St. Mary of the Assumption and St. Paul in Canton.

Chris Grostic advised that Brian Smith, our Communications Coordinator, reported that we had e-mail issues in our last mailing. We are transitioning to a new system and some addresses did not transfer over. There are 600 on our list, but 180 were listed as unsubscribed and some team members did not receive the communications. We will work on this to clear up the problems before the next meeting.

Mike Devault advised he is sending a final prayer group and team member listing. Members should check their own e-mail addresses to make sure they are correct.

Chris Grostic requested that prayer group leaders should make sure their members know who the new team leaders are and their responsibilities.

Chris stated that CONEO meetings should be attended by Team Leaders. Any prayer group member that wishes to attend a Team Meeting; e.g. December 10, is welcome to attend.

Nancy Moran stated that requiring a member to do both a workshop and the follow-up meetings is too stressful, as the preparation time, travel time and teaching responsibilities are very intense. She suggested that the retreat leader be relieved of the follow-up responsibilities. The team agreed.

Chris Grostic stated that the Federated Family Life Center in Chagrin Falls wanted us to do an Intro Workshop in the first quarter of 2017. Federated wants to increase their membership to either start a new group or use as a filler to already established groups. We need a presenter and a Book Table representative.

Any other prayer group that wants an Introductory Workshop should call Chris Grostic.

Nancy Moran reported that Villa Maria is inviting James Finley June 23-25, 2017. She suggested that we cooperate with Villa Maria by offering to lead prayer after the lectures, ask if we can put out our advertising on their hospitality table or getting a block of rooms that our prayer groups can have access to, if they want to attend. Chris Grostic suggested that this be discussed in January after our own Introductory Workshop is completed.

Nancy Moran, also, stated that the Erie, PA Contemplative Outreach is planning to bring in Fr. Menninger. No date has been scheduled.

Chris Grostic reported that the International Office is having their retreat, September 21, 2017 in Denver, Colorado. Many of their staff are retiring and they need to select new staff and reset their future goals. Any member can attend. For further information go on their website.

Marilyn Mack will be taking an annual vacation visiting her children in Texas and California for the holidays. Meetings that occur while she is gone will have to have notes taken by someone else.

One correction is that the International program Sept 21 to 24 that you mentioned is a conference not a retreat.  We had annual conferences up until two years ago.   The new individuals are already on board and running CO.  What we will be doing is learning more of the direction CO is going and a time for input of what we would like CO to include in their new look.

You might want to go to the Contemplative Outreach website, get your name on their email list  and learn more about CO in general.  I would be happy to discuss CO’s history. with you.  Let me know if you would like to set up a phone meeting.

Peace be with you,

An addendum to the minutes – this is not a correction because we didn’t discuss it in the meeting but I want to take this opportunity to make a comment regarding workshop stress in the minutes.  As we already know all the opportunities the Holy Spirit gives us to share centering prayer are meaningful and enriching for both for the transmitter and the receiver.  This is very true of the Introduction to Centering Prayer Workshops.  We also know the gifts of the Holy Spirit are peace and rest – I/we experience stress only when we make it so.  In reality, presenting at workshops is a grace that strengthens our love for and commitment to centering prayer. I wanted to write this because I want to encourage people who have the impetus to do the presenter formation to know what a good and grace filled experience it is.

I also want to clarify that if the presenters want to facilitate the follow up sessions this may certainly be an option.

Please click this link so you may directed to a new page with this sample.

A wonderful group from Kentucky and Ohio meet at Villa Maria for an Intensive and Post Intensive retreat. Susan Komis and Kay Powers were our leaders during this time. We were blessed with this opportunity of peace, silence, solitude, reflexion and being during these days. 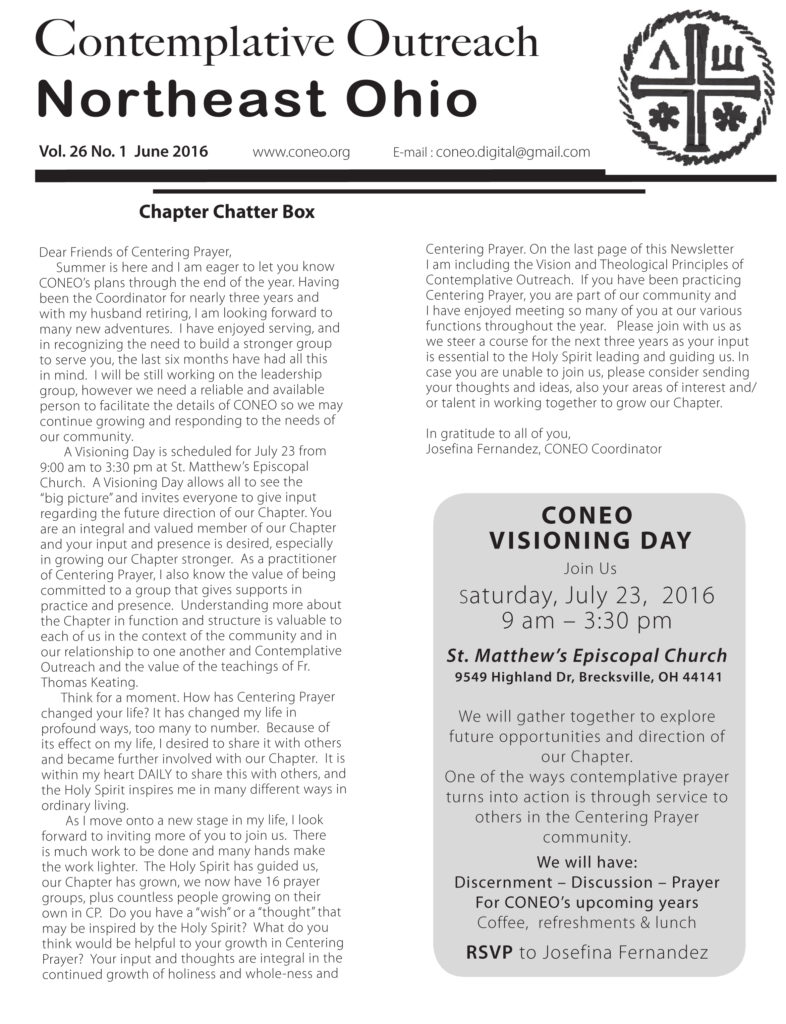 Exploring foundations of Contemplative Living
A Retreat with James Finley

Contemplative Outreach Northeast Ohio (CONEO) had the privilege to work with St. Paul’s Episcopal Church, Cleveland Heights, Ohio for the retreat Exploring the Foundations of Contemplative Living led by Dr. James Finley on April, 29, 30 and May 1, 2016. Chuck Herbruck, from the Centering Prayer group at St. Paul’s Episcopal Church in Cleveland Heights, made this event possible through over a year of behind-the-scenes work. Over 350 people attended.

In keeping with Dr. Finley’s wishes, the audio files were made available to upload on the CONEO website. Click on the blue link at the beginning of each numbered item, below, to play an MP3 audio file.

A Path to Inner Peace: Freeing the Mind and Heart through Spiritual SobrietyIntroductions and thanks by the Rev. Richard Israel, Associate Rector, St. Paul’s Episcopal Church.

Thomas Merton and Teresa of Avila.